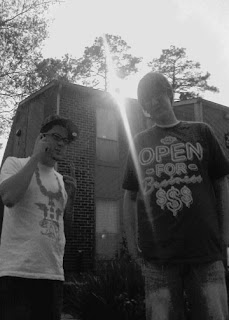 Me and Witnes (QuickWits)have been putting this together since January. Basicaly I would get off work and Wit would come over with some food and his laptop and we would listen to all these tracks and piece it together.

This is the promo jamdar Wit put together for it, including the track list that we both wrote.

DJ Witnes will be at SXSW this week at the Puma/URB Thursday
(www.urb.com/lonestarsocial).

Squince holds it down every Tuesday @ The Grab Bar in Houston and will be also holding the free drinks down @ SXSW.

JR Funk and The Love Machine – "Feel Good Party Time"
This track's title pretty much sums up this mix.

Roy Ayers – "Runnin"
Witnes made his only lyrics to this one and they go
Scooby Doo………..Run run run!
(wikipedia.org/wiki/Roy Ayers)

Cut Copy – "Saturdays"
Squince says this song makes him want to kiss mad dudes but you didn't hear that from me.

Metro Area – "Miura"
"I always want to pull out some Vicks Vapor rub on this track" -Squince.

DJ Mehdi – "Boggin"
So far everything this dude has put out is bangin'. We can dig it.

Eggfooyoung – "MWC"
Our homeboy Dayta (www.nanachill.com) threw this track at us awhile back. Wit gets all Billy Idol when he hears it.

R. Kelly – "Sex Me" pt 1/2
The length of this track on the mix is how long Squince lasts in the sack.

Kid Sister – "Damn Girl"
We both have a huge crush on Kid Sister and we battle on Guitar Hero to see who likes her more.

Le Federation – "18 Factice"
Yeah that probably doesn't translate right, but anyway shout out to the rodeo this year for creating the new category of ghost ride the horse.

Jeopardy Theme Song
What is Self Employed Alex.

Frankie Valli - "Beggin" (Pilooski edit)
Fact: Frankie Valli was a guest star as himself on an episode of Full House.
Fact 2: Pilooski is awesome - (myspace.com/pilooski)

The Four Tops – "Reach Out I'll be There"
We were politic'n at Einstein Bagels and heard this joint. We thought it fit the same vibe as the Frankie Valli jernt.

Bird Peterson – "Big Off"
I thought someone had made a club track of the Four Tops track so I was going crazy looking for one and I stumbled on this track Bird threw at me awhile ago. Thanks B!

Bird Peterson – "Sweet Georgia Brown" (A night on the town)
Smooth jam by Skatebird P, the check is in the mail.

UGK – "Game Belongs to Me"
Such a dope hook on this, literally. Thanks for checking out our mix!!!
mixtape SLFEMP Squincy Jones SXSW Witnes

Anonymous said…
dude this is my shower and going out mix ! hot jams, still play it