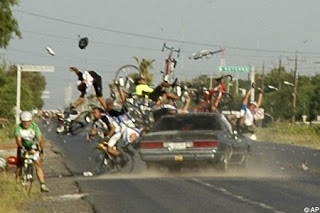 Man this is terrible, the picture is mindblowing.
Taken from: http://www.newschannel5.tv/2008/6/2/992215/Valley-Residents-Killed-in-Matamoros-Crash

MATAMOROS, Mexico - A fatal crash happened in Matamoros during a family bicycle tour. Friends of the victims tell NEWSCHANNEL 5 at least 5 people died.

So far, one of the victims was identified. He's 30-year old Alejandro Alvarez of Brownsville. At least 12 people are hurt. Ten of them are in critical condition right now. Several victims were taken to a Brownsville hospital.

Mexican media reports Jesse Campos of Brownsville was under the influence of drugs, when he tried to drive pass a police car escorting the cyclists, and crashed into a crowd of riders.
Bicycle crash drunk driving Matamoros