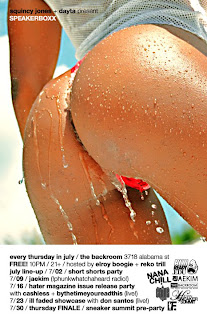 Houston, TX (07/01/09) — This July is the final month that Speakerboxx runs its course at The Backroom (3718
Main behind The Mink). Starting with the July 2nd Short Shorts Party, Thursdays belong to the Speakerboxx
heavyhitters one more month with hosting DJs Squincy Jones and Dayta on deck plus El Roy Boogie and
Reko Trill on the mic. The last Thursday night, July 30, is host to the not-to-be-missed Sneaker Summit Pre-
Party.

For a year and some change, the weekly hot spot, which was a spin-off of the wildly popular Rock Box at The Proletariat, has been hosted by resident DJs Squincy Jones (Awwready.edu) and Dayta (NanaChill.com). This duo continues to meld music genres, bring in national touring DJs and, most importantly, bring up local talent.

You can catch the Speakerboxx gang over at Block 21 (2420 Washington) on Fridays, where they regularly spin
more "party rocking jams". Their official Rotate Fridays kick off at Block 21 on July 31st.