I had another weird ass re-occuring dream last night.

I'm in some club in basketball shorts, Bitch Ass Darius is djing, I go to the booth area where folks I know are hanging out and I spot Gracie.  I say what up to her and i'm like hey sorry I couldn't make it tonight to Bombon.  Shes like cool whatever whiteboy.  So we're chilling, watching BAD and I look up and it looks like another dj is getting on in another area of the club.

I asked a dude next to me who looks like hes gearing up to play next on his laptop sorting tracks.  Dude says, "Nah he wasn't feeling that setup so he moved up there (there being a stage in the middle of this club, before he was in this booth on the side.)  I said something about djing indian style is the comfiest or something corny.  I then realized dude I was speaking to was Diplo.  I think I attempted another joke and felt like a goof and walked off.

Walking off, squeeze through a group of folks, two girls start dancing on me, one grabs my arm and gives me weird eyes, I made a weird grunt and look back over at the dj, look back at her then its like a slim Luis Guzman holding my arm.  Like methed out out Luis Guzman.  WILD!

I get away from Breaking Luis, go to sit down on some benches, some dude comes up and says, "Excuse me do you have any money I've been away for 9 years."  I was hesitant to give him money, then I look over and its Tyler the Creator.  In a wheelchair.  Tyler says, "Hey you're so in so, you were in (names some country,) my folks have family out there.  Hands dude a fiver and i'm thinking, ok this dude really is going through some thingies and give him a couple bucks.

No biggie.  Start watching the show, its still Bitch Ass Darius but its not his music, its like The Launch or just some shitty typical mid 2000 electro garbàge.  "Why am I not seizuring to some Ghettotech?  Kinda sad, whatever.  Ok.  So then been away 9 years dude comes back over to me and has a
SEVEN HUNDRED, AND FIFTY DOLLAR BILL.  A BILL THAT SAYS $750 ON IT.
$750.

"Hey mister, can you make change with this?

"Uhh naw dude I don't have that much loot.  Sorry"

"Come on you can break this."

As hes saying that some guy comes over and like superman punches the guy off guard.  EEESH.
He then puts dude in headlock and starts cutting his beard off with a knife.  Very. Scary.  I get off the bench and s l o w l y start to take off and as i'm walking away I see a dude pulling out a gun....now i'm running and then theres shots.

So i'm running and then see Tyler the Creator moving slow as hell in a wheelchair.  I grab his chair,

"COME ON TYLER LETS GET OUT OF HERE!!"

We haul ass through the crowd, dodging folks left and right when out of nowhere, RASHIDA JONES IN A WHEELCHAIR grabs for Tyler causing us to spin out of control.  Tyler chair flips but hes attached to it like Professor Xavier and spirals on the ground in it.  I pull him up and we nascar it to a nearby hotel.  Once we're in the lobby, he hops in an elevator without me.

So the weirdest part about it is that this is the second dream I had where Tyler is in a wheelchair and I save him.  The first one I had I barely remember but when we get back to wherever we go he just gets on his phone and I fall asleep on a couch. 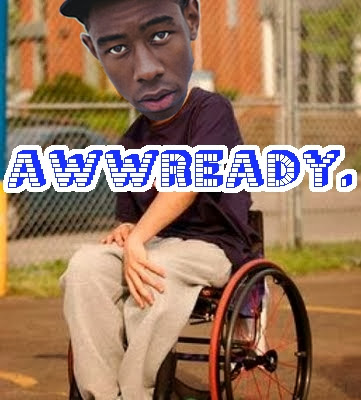